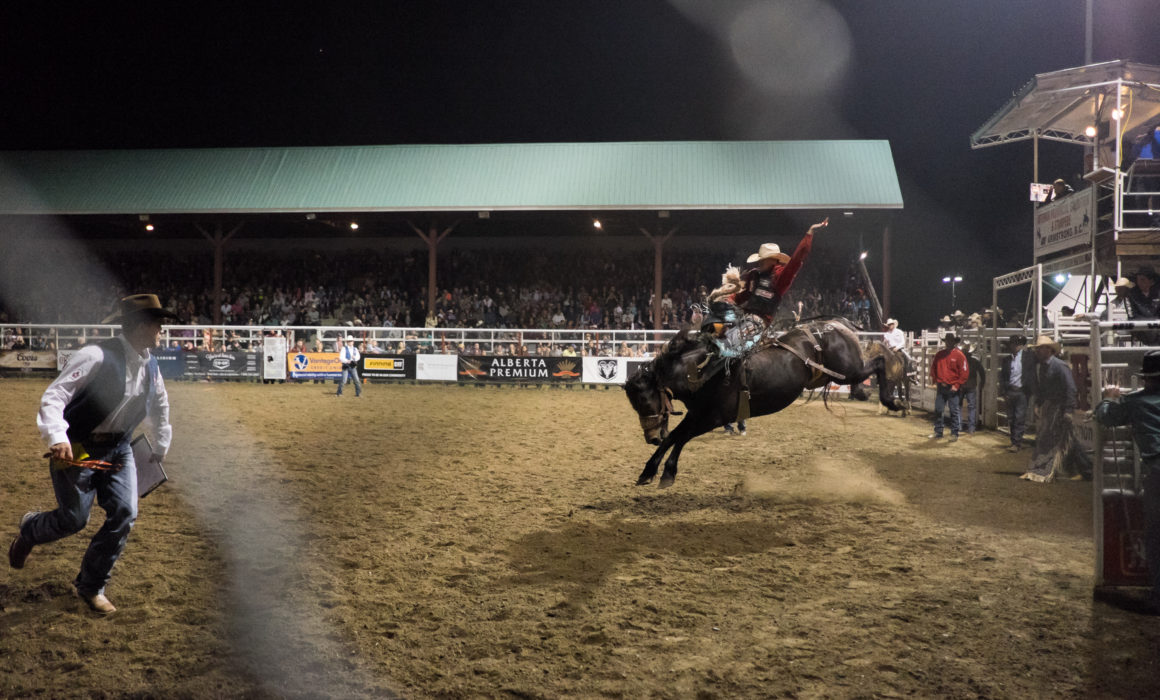 Bulls snort and paw the ground. Barrel race horses anxiously prance in place. Cowboys and cowgirls watch and wait, arms crossed. The MC gives a booming welcome to the crowd.

You’re at the rodeo.

The highly-engineered, planned and very profitable events of today have moved leaps and bounds from the humble roots of the early rodeo days. Yet, magic, mysticism and controversy still surrounds the modern day rodeo. Some think it’s built on “man vs. beast,” but I’m inclined to think it’s actually “man with beast.” Barrel racing requires the rider to be so in-tune with their horse, they practically become one. The horse gallops the length of an arena, weaving in between three barrels and back to the starting line–all within about 15 seconds.

All of the riding events: bull riding, bucking bronc and saddle bronc all require the rider understand how the animals move and adjust their balance in order to sync up with the 1000 lb. plus animal who is in control.

Riders have only eight seconds. They need to stay on the animal, hold on with one hand, keep their heels in above the shoulder of the animal and keep one arm in the air. Those able to stay on for eight seconds get a score on the quality of their ride. The animal also gets a rating, with the rowdiest and rankest bulls getting higher scores.

I can’t think of much that I do in eight seconds. I have a deep and profound respect for professional rodeo athletes. Maybe it’s because my father used to compete, or possibly because the pomp and show is one of the best events to watch in my small hometown. The energy that exudes from the athletes, animals, and arenas is intoxicating. We all want the athlete to do well. We all want the animal to excel. No one wants anyone to get hurt.

This is where most people unfamiliar with the sport are lost. Because it’s a rough sport, because people get hurt, it’s not an off-base assumption to think rodeo is cruel to animals. People want to know why the bulls buck the way they do. They think they are in pain. Well, here’s the answer: a strap is attached over their flank and it irritates them, and their natural reaction is to buck. Once the rider jumps, or is dumped off, the strap is quickly taken off and the bull is in no distress. But, it’s easier to be upset if you assume the animal is in pain.

I would have a tough time reconciling my thoughts about rodeos if animals were being hurt.

This happens a lot today. We are quick to define something as good or evil, ethical or unethical. We have a need to categorize everything. What happens when the topic up for debate is embedded in culture? Who is going to tell a First Nations person that they can’t hunt deer because eating animals unethical? Who is going to tell an elderly ranching couple the rodeo their son or daughter is competing in is animal cruelty and shouldn’t exist? That couple worked from sunrise to sundown and broke their backs to build that ranch. How arrogant are we to think we can tell someone else their way of life is wrong?

Yes, I’ve been consciously eating very little meat in an attempt to reconcile my feelings against animal cruelty in factory farms. Yes, I am trying to get very close with lentils in an attempt to lessen my own consumer demand of meat. But what does that have to do with rodeo?

I know I can’t generalize, but all of the farmers I’ve known respect and care for animals in a way that I’ve only ever seen echoed by veterinary staff.

This post is longer than I planned. I guess this is what happens when I take months off from writing–things get disjointed.

Barring anything clearly detrimental to the environment or another creature, I wish we didn’t need to label someone else’s way of life as wrong or unethical. More than anything, I wish that every disagreement or difference in opinion didn’t turn into a vicious, incendiary brawl, full of definitives. I wish that we could talk through our issues and still regard others as people. Rather than losing hope, tuning out and becoming content with disengagement, I’ll keep trying to make healthy debate and discourse not only a possible reality, but a welcome one.